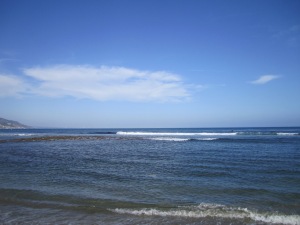 She awoke feeling bleh. Her mind was a cloud and every inch of her skin was crawling with impatience. She knew that her depression had set in hard and deep.

She knew that even though the bed and sleep seemed like the most comforting thing to her at the moment she had to fight against the darkness that was creeping into her mind.

Moving to her computer she started to put on the makeup she kept there for such times and took the time and attention to feel good about what she’d done before getting dressed in something comfortable and cute.

Look how you want to feel right?

She headed toward the beach her anger at life building, causing her foolish thoughts of crashing into the assholes that so often filled LA roads. Just running her car into one of these idiots might lift her mood, but she drove on until she reached the coast.

Getting out of the car was the hardest part, already filled with self-hate and no self-esteem coming to the beach was always hard, too many beautiful people. Even though most of her was covered up she was conscious of her weight and scars.

Once away from the safety of her car she started walking along the path, the sun shining from the sky down on her. The ocean was a clear blue with frothy white caps. It was picturesque and peaceful.

Something strange began to happen, her face started to move. Her cheeks were dimpling and her teeth started to show as she smiled! That’s right she smiled. The more she stood outside the more she smiled and the better her mood was.

After 1 hour of walking the sand crests and oceanic view her mood had done a complete 180. She was happy almost to the point of skipping and her day looked hopeful.

Was it the sand, the ocean or the sun? I have no idea but I think the weather had something to do with it.

3 thoughts on “Sunshine On A Cloudy Day”

My Other Blog: A Bipolars Reality

Figuring the new WordPress out